The National Journal has a sneak peek at the NRCC’s new, Buzzfeed-esque website, set to launch sometime in the next few days.  Since the dawn of 2013, the NRCC has been quietly and not-so-quietly doing some good things to get House Republicans (and prospective House Republicans) positioned well for 2014 – rootsHQ has a good write-up of that.

On the design side, though, check out the lack of traditional colors: 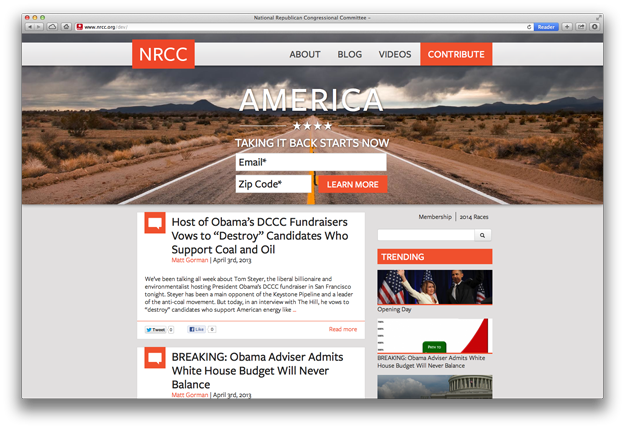 Contrast that with any of the other alphabet soup committees on either side.  There’s occasional splashes of black and yellow, but mostly red, white, and blue.  The NRCC is trying to stand out from those sites, and the early peek suggests they’re doing it right.

This should especially help drive donations and activism on behalf of Republican candidates.  The cynical analyst might point out that the only people who will visit a party committee website is someone with a keen interest in politics.  The average citizen won’t look to the NRCC as a destination for content, though they might see content in other venues like Pinterest or Facebook.  But those with a keen interest in Republican politics want something different from the party after the previous two Presidential elections when old white guys didn’t do so well.  They want a different tone, and something they can believe in.  By showing a fresh, new look – combined with the more aggressive and pop-culture-influenced messaging strategy they’ve been sharpening for a few months – the NRCC can satisfy the thirst among the activist class for a fresher look and feel.