Channeling 1980s classic Nintendo games, Americans for Prosperity has a fun game called “Lame Duck Hunt” on one tab of their Facebook page.

The game isn’t all that challenging, though the gloating images of Nancy Pelosi and Harry Reid that taunt you when you miss make it slightly more frustrating than it needs to be.  This isn’t a game review, though, it’s a strategy review, and there are a few things AFP gets very right.

First, you can’t play the game without surrendering an email address and a zip code, meaning that anyone who participates in this little time-waster tells AFP which Congressional district they live in and how to get in touch with them. 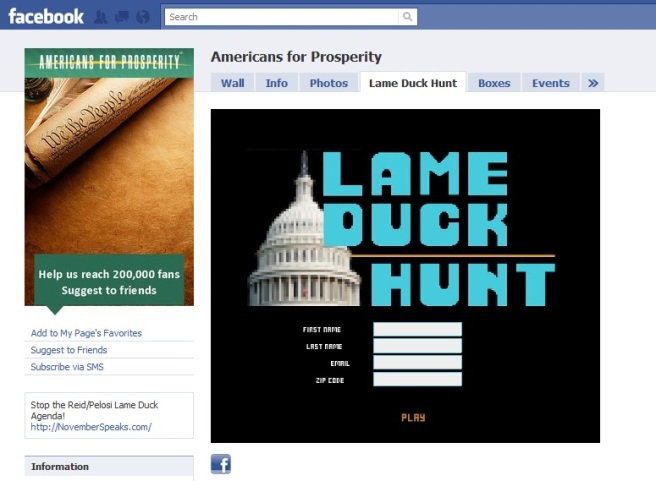 (You do have to re-submit your information each time you play, which discourages repeat users.)

Once you’re in, you predictably shoot down ducks, which then disappear in a cloud of feathers and leave behind warnings like “Higher Debt,” “Card Check,” or “Huge Tax Hikes” – the policies which ostensibly could be the result of the lame duck Congress.  You can then share your score with friends. 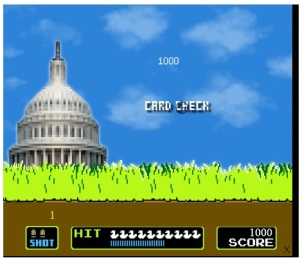 This is where AFP’s aim starts going awry.  The game never offers any backing for the labels – there are no details about suggested or proposed legislation which would lead to union bailouts, huge tax hikes, or higher debt.  The message at the end invites me to “visit the Americans for Prosperity website” for more information – but there is no link.  Contrast that with the game released by the U.S. Chamber of Commerce last week, This Way to Jobs, a digital version of Chutes and Ladders which outlined the pitfalls of launching a small business.

Further, I have played the game several times (for… uh… research, for this post – that’s the ticket).  That means I’ve entered my email address multiple times, and haven’t yet received a follow-up auto-responder email.  After anyone plays the game, a quick follow up email inviting further action – while the issues are still fresh in the player’s head – could help AFP determine who is really on board with their policy agenda and who just hates video ducks.

Ideally, the game over screen and follow up communication would also allow users to identify what future actions they would be willing to take.  At the very least, it would invite a user to become a fan of AFP’s Facebook page.

These extra steps may not help with the lame duck agenda, but 2011 will be a critical year as the Republicans and Democrats try to set themselves up for success in 2012.  Lame Duck Hunt is a cool idea, and well-timed – between the impending holiday and people taking off work early to beat traffic, Thanksgiving week ranks only ahead of the dead week between Christmas and New Years in terms of productivity.  To that end, it’s guaranteed to bring web traffic – and it looks like AFP was content with that.