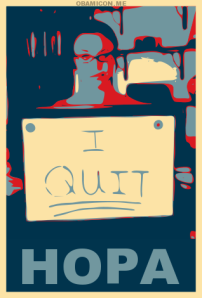 Yesterday, the story of a young go-getter who quit her job via a series of dry-erase board messages due her boss’s sexual harassment burned up the internets.  The girl was dubbed “HOPA” (after her boss’s mistaken acronym for “hot piece of ass”) or “Jenny DryErase” by supportive Facebook followers and commenters.

Today, the story was revealed to be false.  Yet it is still an excellent career move for an aspiring actress and an aspiring comedy website – and illustrates the value of timing in capturing the short attention span of folks online.

The original post, on comedy site The Chive, was set up to go viral for a couple reasons.  First, the act of quitting a job and metaphorically burning the place on your way out Jerry Maguire-style isn’t completely out of left field; even doing it through a variety of emailed photos isn’t even that out there.  It’s her signs and her emotive facial expressions that makes the user laugh.  Second, and more important, the girl’s story works equally well if it’s true or not.  So it wasn’t unbelievable, and investing in the story didn’t mean believing it was true – creating a low barrier of entry.  The stage is set.

But as with all comedy, timing is everything.  The Chive struck gold by releasing the pictures on the same day that an airline steward became an international folk hero for leaving his job down the escape chute, a beer in each hand.  profanity-laced goodbye to his own job, so quitting was in the news.  They couldn’t control the news cycle, but it worked to their favor.

What they did right on their own, however, was debunk the story of HOPA girl the day after attention peaked.  Announcing the hoax in a month, or even in a week, would have meant reaching people well after they had forgotten the Jenny DryErase post and moved onto the next Hitler/Downfall parody.   In other words, it would have been irrelevant, and there would be no lasting benefit.

The real HOPA girl, actress Elyse Porterfield, has her name everywhere; people who might be in a position to help her career know now that she can pull off a pretty good photo shoot. The Chive has the added web traffic and the street cred with that comes with manipulating web audiences into taking a hoax viral.  Advertisers like sites that can, occasionally, draw big numbers for a few days.

The tactic of a fake viral picture isn’t really translatable to campaigns, which have to be somewhat transparent in their messaging.  But it is important to understand how fast online communications work.  Windows of opportunity aren’t open wide and they aren’t open for long.