That John McCain, two years after being his party’s standard-bearer, is fighting for his political life in a primary against talk show host J.D. Hayworth is telling of how urgently many GOP activists want a cathartic cleansing of Republicans of recent vintage.  However, an online video released by the McCain camp makes an argument that the conservative movement needs effective messengers as much as effective messages.

The message is subtle even if the delivery is not: the GOP has a message problem that goes beyond government policy, and the elevation of a voice like Hayworth’s would add to the stereotype.   One would assume that McCain’s campaign has internal poling numbers which show this is a strong field for them to play on, and that Republican primary voters are vulnerable to fears that Hayworth will be perceived as a joke.

The McCain folks are certainly careful to tread cautiously to avoid offending activists – they use extreme-sounding quotes from Hayworth, but on selective issues.  For instance, the video doesn’t take a stand on gay marriage, but it does quote Hayworth’s hyperbolic comparison of gay marriage to bestiality.  This is followed by Hayworth overreacting to an off-hand comment from a political opponent who promised to metaphorically drive a stake through Hayworth’s heart – echoing the over-the-top rhetoric of some Democrats after the recent health care debate.

With this video, McCain tries to tell conservatives that Hayworth is simply not strong enough to carry their flag.  It’s a pretty sophisticated message – and a good one for McCain to deliver, given his at-times-contentious relationship with conservative activists. And the video is funny, which always helps.

McCain does make one mistake in the presentation of his case that’s worth a chuckle or two.  A quick glance of the official John McCain YouTube channel offers potential for misunderstanding; the thumbnail for the video happens to be the screen frame reading “Expose Obama’s Secret Kenyan Birthplace” – and it looks more like a campaign promise than a joke. 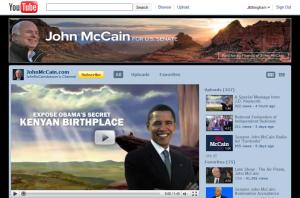