YouTube’s new design for its video player pages debuted yesterday.  The new, streamlined style highlights the video itself, with comments and share links underneath: 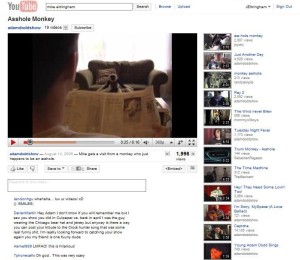 Previously, YouTube video pages had focused many of their functions “above the fold”: most of the functions and options were arranged so they could sit on your computer screen simultaneously with the video.  Like a work desk that has every document you need somewhere on the desktop, clutter accompanied convenience.  This design is more vertical and simple.

More subtle are some of the functional shifts: YouTube’s ratings system has been replaced with a Facebook-style “like” button, and the comment system has been tweaked to prioritize video responses and comments from frequent video uploaders and power users.

Perhaps most interesting is the explanation behind the changes, as reported by Wired:

Two members of YouTube’s team mentioned the fact that people watch YouTube for an average of 15 minutes at a time, while they tend to watch a staggering five hours of television at a stretch. YouTube aims to shrink that gap with its new playlists, which will present a selection of similar songs if you’re watching a music video, for instance. You’ll also see search results that follow you around the site so you can check out a number of them in succession, and rollover previews at the top of the screen.