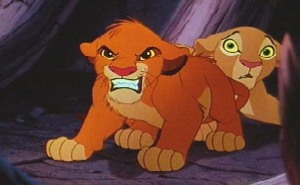 Here are some things you might not know about lions:

According to National Geographic (yes, that’s a link to their kids’ website, but I’m assuming the facts are still good – it’s not like they’re lying to children, so back off) lions are not the “King of the Jungle.”  Despite a fancy title, they inhabit plains and grasslands.  Lions are somewhat inept at hunting, with just one kill per seven tries.  Sometimes they swipe food killed by other animals, and within the pride, the hunters who do all the work, the lionesses, are not the ones who eat first.  Male lions, whose main roles are marking territory, get to visit the zebra buffet first.

So comparing someone to a lion – though occasionally valid – may not always be a compliment.