Of course I had to click on this headline this morning: “Seinfeld joke gets man canned for harassment.”  Since just about everything I say is a quote from Seinfeld, The Simpsons, The Big Lebowski, or Star Wars, the implications were clear in the first line:

A Cedar Falls man who repeated a gag from the “Seinfeld” show while at work has been fired for sexual harassment.

The gag was that, when someone sneezes, instead of saying “God Bless You” one should reply with “You are so good-looking.”  That’s probably not a reference I would use at work, but it was during an outdoors retreat, so the employee, John Preston, probably felt like typical office decorum was a little relxed.  I wonder if there’s more?

A week after the retreat, Preston allegedly sent the female worker who initiated the joke a series of e-mails in which he reiterated that she was good looking.

A few weeks later, Preston allegedly stopped the woman in a hallway at work and massaged her shoulders while speaking to her. That generated another complaint, and early this year Preston confronted the woman at a work-related event.

So it doesn’t sound like the Seinfeld joke – which was actually made by the woman who reported the harassment – got this fellow fired at all.  Whether or not the woman’s allegations are true – and it sounds like they are – I’m filing suit with the Des Moines Register for the time I lost reading their story based on a misleading headline.

And I have a very convincing attorney: 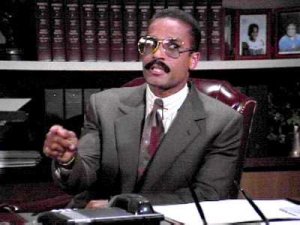