Resurgent Republic posted this infographic last week (which I swiped from an email from Pennsylvania political consultancy ColdSpark Media): 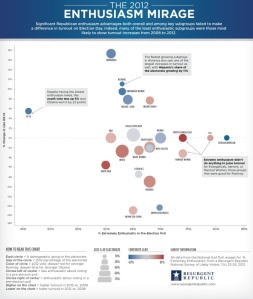 The full-size picture does it more justice.  It charts various groups, how strong their turnout was in 2012 versus 2008, and how excited the said they were to vote.

In the last month and a week, it seems like no two Republicans can talk to each other without a discussion of What Went Wrong.  It’s a great conversation because there’s no wrong answer.  Every person who says, “I’ll tell you what Romney missed out on…” and then fills in a reason is usually right.  So the tactical deficiency in that picture is a puzzle piece, but it isn’t the whole problem.

All that said, check out the bluest of the blue groups, staunch Obama demographics like single women, 18-29 year olds, and Hispanic voters.  Isn’t it funny that the blue groups that were least excited about voting but voted more than the red groups that were more excited?  Part of the vaunted Obama turnout operation was figuring out who needed to vote and doing what it took to drag them to the polls; this sure makes it look like the credit was well-deserved.