Immediately after the State of the Union address, NPR asked listeners to describe the President’s speech in three words, then made word clouds out of the responses.

The dominant word from the speech?  Salmon.

Even self-identified Democrats told NPR the fish was the biggest hook of the night – here’s their word cloud: 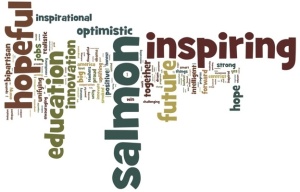 At first blush, it seems like President Obama lost his message. The President’s recommendations on economic, education, and energy policy took a backseat to a joke that, as my brother said, sounded like it was ripped off from a Kenny Bania routine.

In reality… That was gold, Jerry.  Gold!

The President’s job approval rating is creeping up, but Republicans are rebounding in the polls as well.  In other words, his return to good standing with the public probably has more to do with the fact that, since the election, there haven’t been television ads running non-stop blasting his economic and health policies.

That will, of course, change in the coming months, once the real legislative battles start, and once the Republican primary season starts in earnest negative messages about President Obama will blanket the news coverage.

For all the talk about Obama’s centrist political re-orientation, he has to be personally likable if he wants to win in 2012.  His charisma was a key factor in his ability to best John McCain in 2008, and the lack of charisma among the early Republican front runners will make this an advantage for him again next year.

Obama may not be able to get a majority of Americans to agree with him, but he can get them to like him.  A State of the Union speech most memorable for the yuks can only help that.  Viewers (and voters) can disagree about income tax policy or health care overhauls; a good sense of humor can cut across partisan lines.

One thought on “Winning the Salmon”