Last week’s Pew survey on the state of religion in America paints a grim long-term picture for libertarians and fiscal conservatives. You might think that only social conservatives rely on “values voters” – but you’d be wrong. Check out this week’s post at Communities Digital News, which explores the link between religion and free markets.

Reason – which I usually like – is upset with 2016 GOP hopeful Bobby Jindal for urging people “to turn back to God.” Jindal is quoted saying, “America’s in desperate need of a spiritual revival… We have tried everything and now it is time to turn back to God.”

As a libertarian, Reason’s Nick Gillespie reasons that Jindal’s perceived preaching is distracting from the real demons which vex our lovely nation:

No, it’s not time to “turn back to God,” especially when it comes to politics and public policy. What ails the government is not a surplus of religiosity but a nearly complete failure to deal with practical issues of spending versus revenue, creating a simple and fair tax system, reforming entitlements, and getting real about the limits of America’s ability to control every corner of the globe. God has nothing to do with any of that.

First, that Jindal was speaking to a group of religious leaders makes the Governor’s comments slightly more relevant. Jindal was not making his case to a broad audience, but trying to incite action among people who care deeply about their faith and who lead others who care deeply about their faith. For an audience like this, Jindal has to make the discussion religious; why else should these people care about politics?

More importantly, it’s worth taking a look at what roles religious institutions can play in society. Congregations socialize people. They coordinate an economic and emotional safety net which society has deemed necessary. In the absence of religious participation, where have those duties rested? It’s been the government, which was enacted less effective social welfare programs – entitlements funded directly or indirectly by a combination of complex taxes and reckless deficits.

These are the exact problems which Gillespie puts front and center, minus foreign policy. Perhaps he is correct that “God has nothing to do with any of that,” but overlooking religious participation as a part of the solution misses the point. One of the really good things that came out of the more recent Bush administration was the concept of faith-based solutions to social problems. If you have a strong group of people who want to help cure social ills, and the government doesn’t have to spend tax dollars on it, why would you try to quench that desire?

Gillespie is correct that Jindal – or any Republican – does need to be mindful of the way they talk about such things. Political rallies cannot sound like a revival meeting, and the American people – religious or not – generally don’t like being preached at outside of church (and sometimes not even inside). Yet churchgoing voters are out there, their views are important and, ultimately, that their altruistic tendencies can create alternatives to lessen the strain on the social safety net.

Kudos to Science Guy (and Newhart nemesis) Bill Nye and Creation Museum founder  Ken Ham.  Many of those who disagree on the question of how the Earth was made don’t talk to each other.  These guys went the other way.  (And they got into it, too, the video at that link is almost three hours long.)  At the very least, that shows that both are sincere in their science-based approach to problem solving.

But there is a problem when this type of debate is played out.  Folks like Ham says the Earth is just 6,000 years old.  Folks like Nye says our world couldn’t have been constructed in six days.  Interlopers like to say this is science versus religion.

So what’s a year, and what’s a day?  Those are pretty relative terms, since they are based on a single astronomical relationship: the Earth’s motions around the Sun.  Days are shorter on Saturn, and years are longer on Venus.  For a God who created the universe, these are small measurements.

We do know that there are laws of physics.  When the crap hit the fan during the Apollo 13 mission, NASA was able to calculate a plan to use the gravitational forces of the moon to slingshot the spacecraft home.  The moon’s forces, though not completely understood, behaved in a predictable way.  The busted tin can with three astronauts on board reacted to those forces in a predictable way.   Astrophysicists call that science, but if you sit back and think about it, it’s a miracle.  (And not just because they math they got right was really, REALLY hard.)

We know that moons orbit planets, and planets orbit stars, and stars orbit giant mysterious centers of galaxies.  We know those galaxies stretch out over incomprehensibly vast expanses of the cosmos, yet form patterns as well.

How miraculous is it that those forces and reactions are intelligible?  How amazing is it that out of the black emptiness of space came the forces of gravity and dark energy that created suns, planets, galaxies, moons, asteroids, quasars, black holes and a bunch of stuff we haven’t even figured out yet?

Read the first passages of the Book of Genesis, then read a scientific account of how planets are formed.  It’s great that Ham and Nye had a civil and good-natured, discussion about the origins of the universe.  But did they really have anything to disagree about?

Nope.  But that’s the quick and dirty understanding of today’s announcement that Pope Francis will grant the same plenary indulgences to those who follow his appearances on Twitter as he does to those who show up in person.  Mashable had to correct an earlier post that made the mistake, and other outlets have had a similarly difficult time understanding what’s going on.

Credit the Church with gamely trying to explain the tactic:

But a senior Vatican official warned web-surfing Catholics that indulgences still required a dose of old-fashioned faith, and that paradise was not just a few mouse clicks away.

“You can’t obtain indulgences like getting a coffee from a vending machine,” Archbishop Claudio Maria Celli, head of the pontifical council for social communication, told the Italian daily Corriere della Sera.

Unfortunately, even the framing of this quote reflects that the Church’s announcement wasn’t completely understood with the explanation.  (Sidebar: The phrase “old-fashioned faith” is a literary crutch.  Faith is not old-fashioned, as any modern religion can tell you.)  The entire story reads like the news that Newt Gingrich was paying for Twitter followers, with the expectation that a modern-day Martin Luther will nail 95 theses (each one 140 characters or less) to the Vatican door about why pardoning sin for a Twitter follow is wrong.

A better description is that those in attendance via social media will be treated like those in attendance in person.  The Church might have added that, much like angels and prayer, that which is unseen is often more powerful as that which is seen.  (Or, that which is invisible is often more powerful than the visible, if you prefer the new translation.)  In the parlance of our times, it’s the religious equivalent of working from home but not having to take a sick day.

Credit the Pope for opening up avenues for online communication, and making his appearances that much more accessible.  With that, though, comes the need to explain the faith to those who don’t understand it.  It’s not evangelism, it’s public relations. 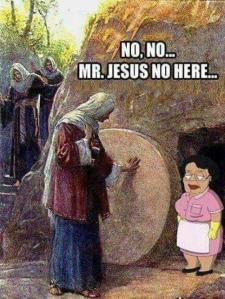 The New York Times is catching flack for last weekend’s coverage of the Catholic Church’s Easter Mass.  The passage at issue:

Easter is the celebration of the resurrection into heaven of Jesus, three days after he was crucified, the premise for the Christian belief in an everlasting life.

The Times caught the mistake later and issued a correction, noting that Easter celebrates Jesus rising from the tomb but not his ascension into heaven.  Newsbusters calls the error “mortifying,” but it’s more revealing about the paper itself.

If you don’t understand the faith, it’s a matter of semantics.  Jesus came back after being crucified, and went to heaven – so being “resurrected into heaven” may seem like an accurate shorthand description to the reporter and copy editors responsible for the gaffe.  Sure, it’s wrong, but understandable for the ill-informed on the topic.

It’s probably not a good idea to get your religious information from the New York Times, anyway.  You don’t get your news at church, after all.